It's the end of a week where I spent most of what free time I have for sims with iRacing. And specifically the Ruf C-Spec at Okayama.

I'm not going to go into detail with iRacing in this update. That will have to wait for another time. Suffice to say at this point is that it promotes itself as a motorsports simulation.

I'm not driving the C-Spec this season, but I am preparing for next season, when I plan to concentrate on the Ruf Cup series, which is essentially a Porsche Cup, but with the Ruf substituting. That's the nature of licensing deals in the modern world.

The Ruf Cup is a C class series. I currently participate in the Skip Barber D class series, but I'm taking this week out of the twelve week series as a "drop week", and instead I've put time into developing a setup for the C-Spec.

Now this is the first time I've really put this amount of time and thought into a setup. I confess I'm still learning what does what and why. And perhaps that is an advantage in some ways. I'm just following the numbers at this point.

The goal I have is to create a setup that behaves well in four cornering phases: straight line braking; turning in; mid corner; and corner exit. I want a setup that allows me to be back on the gas before or at the apex, without having to come back off it to compensate for oversteer.

I don't expect to have it finished this week. I'll continue improving it - hopefully - during future drop weeks. As of now I've worked on brake balance, spring perch offset, bump, rebound, bump stop, spring rate, ARB and toe - in that order. That's not to say those values are final. Far from it. I expect to go back and adjust everything when I've completed the initial setup.

It might be the setup or it might just be me, but I still don't have the confidence to be aggressive with the throttle at the apex. I'm easing it on as I roll out, whereas I'm lead to believe the Porsche is best driven with trail braking to the apex and then hard throttle - "the grip will be there". I find it oversteers into a wall.

Again, that might be me more than the setup. This is how it looks - work in progress - right now: 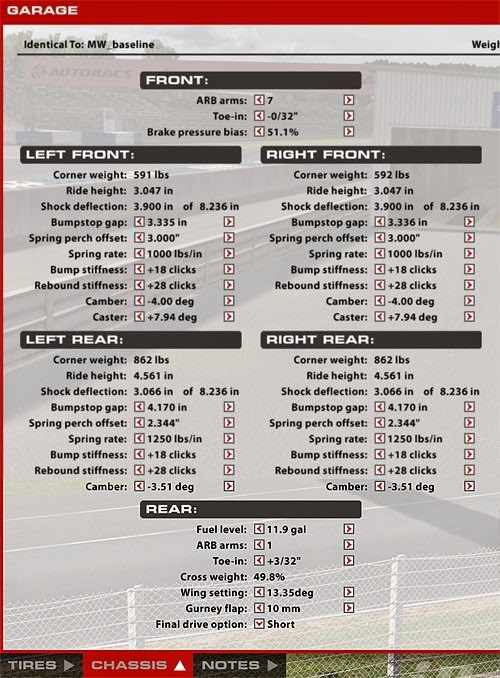 And below is a lap of Okayama with that setup. Why Okayama? Well, it's notorious for becoming a bit slippery, which means, at least to me, that if the setup does what I want it to there, then it should be pretty solid wherever I take it. And aside from minor changes per track I want this to be a solid base.

And that is mostly it for setup work in the C-Spec at Okayama for this week.
Posted by supanova at 03:55