This is an example of the downside of sim racing. The driver on the inside is clearly not alongside, and as you can see from the angle of the steering wheel at bottom left the car on the outside is already turning in, at the proper turn in point. 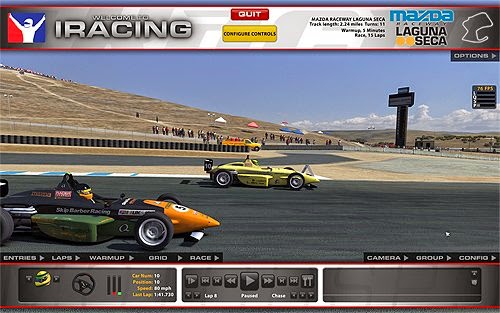 The common mantra - and it's not specific to iRacing - is that it's the responsibility of the overtaking driver to ensure a safe pass. The best way to do that is to be alongside in the braking zone. An attempt to pass later than that increases the danger with each foot of ground covered.

The second pass I made last week into the second chicane at Oulton Park was about as late as I'd want to take it. I was alongside at the turn in point. Those passes look dramatic, but it requires compliance on the driver being passed to do it without incident.

When a driver dives down the inside at the turn in point that is not a safe pass. The overtaking driver deserves to have the door shut firmly in their face. It's what is popularly known as a dive bomb.

The overtaking driver in this case will most likely struggle to handle the apex at that speed, which increases the risk of collision mid corner even if the car on the outside isn't turning into th actual apex.

This is what I call the "right here, right now" approach, which is sadly prevalent on iRacing. There is actually a very long straight two corners away, but the overtaking driver wants to make the pass on a fast right hand corner, rather than even look down the inside into a slow hairpin leading onto the straight.

This is racecraft. But in the culture of hotlapping at iRacing that's a difficult thing to preach. You are more likely to hear Senna quoted, which given the medium we're working with, and the lack of bodily and structural risk, is not conducive to good, clean racing.

But as you drive you do make note of who you can race with, who you can trust, and who you need to close the door to, nice and early. And, unforuntately, who you just need to let go so they can ruin someone elses race.
Posted by supanova at 03:32