Elite is a title that truly justifies the term "seminal". It had that magnitude of influence in computer gaming. It put you into a world in which you got to decide what you wanted to do. You could trade, you could steal, or you could hunt down those that did the stealing. It was your choice.

And, by the way, programmers that could fit such a complex world into 22k are artists. Imagine; a game of that kind the size of a modern email.

Well, Elite is back, developed under the leadership of creator David Braben. You won't find it on Steam or your favourite retailer yet, it's still under development, but as a Kickstarter funded program it's open to participation. The early backers received alpha access, spending hundreds to make sure the title got made, and to help develop it through their input.

The beta program is now available, and is more affordable. If you're interested in learning more about it, click here.

I'm not all that far into it at the moment. I'm literally working out how it works. But the first thing that strikes you about it is just how beautiful it is. It may sound like hyperbole, but for the first time I can remember I knew what the high definition resolution on my monitor could really do. Coming up to a space station, or flying through an asteroid belt, is a stunning experience. There's definitely a feeling of scale.

Here I am approaching Azeban City, ready to dock. 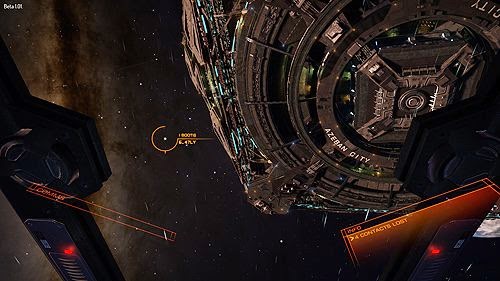 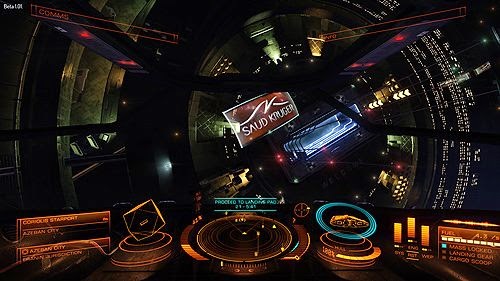 At times it has a feeling of Blade Runner about it. That doesn't carry through to all the elements, at least not yet, but it's extraordinarily rich at times. Planetary exploration is promised in a future expansion, and if done right, as they're promising it will be, it should take Elite to an extreme level of immersion.
Posted by supanova at 03:11