The BMS implemenation of the HMCS is incomplete, but it still provides very useful air-to-air features, which when understood and mastered, give the virtual pilot an advantage over opponents.

Posted by supanova at 13:07 No comments:

The HUD is a wonderful tool. As a pilot you're no longer tethered to your instrument panel. But when it comes to a close in fight you can't always point your jet just where you want it. And that can make cueing a weapn very difficult.

That's where the Helmet Mounted Cueing System, or HMCS, comes in. Because with it you can simply look where you want the missile to go. 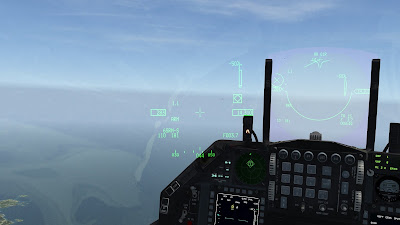 The HMCS tutorial will show you how to turn the system on, adjust it using the options available, and use it in a short range dogfight using ACM and the AIM-9 Sidewinder.
Posted by supanova at 11:30 No comments:

This is a short video on two modes; Missile Override and Dogfight.

The modes share the same basic role - to provide a quick means of responding to a sudden threat.

Posted by supanova at 15:18 No comments:

We're back with piston engined aircraft.

That means that it's not possible to do a proper start-up procedure. You simply have to press E on your keyboard. I don't mind that in the sense that it should be available as an option. You can then choose to roleplay the start or dive right into the flight itself, or at least taxi to the runway, unless you have the option to spawn on it.

The start-up procedure becomes even simpler as you transition to warm-up if you have an already warmed engined selected on the options screen.

I note that 777 have acknowledged that the community wants a more realistic simulation. I don't understand why so much effort would be put into flight models when at the same time start-up has been simplified to such an extent.

I'm not criticising that title, or titles like it. There is room in the market for titles that offer different experiences. But in my opinion IL2 is a title that isn't quite sure what it is. But from what I have seen it does appear that there is a growing realisation that the IL2 series should lean more towards the study sim side of the market in future.

I would like to think that this video explores some of those thoughts. I'm not criticising IL2. I think the things it gets right it does so in a breathtaking way. It has a very immersive and compelling character. You will want to learn how the aircraft fly, and compare your experience to the notes of pilots of the time. And with the promised changes the future for the series is promising indeed.

Posted by supanova at 16:32 No comments:

This is a brief preview of this weeks video. This will be a short tutorial on two modes - missile override and dogfight. These modes are quite straightforward as they simply perform the role of shortcuts to previously discussed modes, with one exception, which I'll discuss in the video. 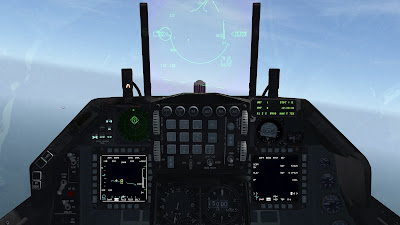 If you've watched the videos on air-to-air combat you should recognise the screenshot above, and it should be clear what radar mode the aircraft is in, and what weapons are selected. But there might be enough new detail present on the HUD for you to be curious. I hope the video scheduled for this weekend will answer your questions.
Posted by supanova at 16:16 No comments:

The IL2: Battle of Stalingrad mission editor is a complex but powerful tool. At first glance it's unclear how the various relationships work. But with time and effort these inter-dependencies should become more clear.

This tutorial is an attempt to put on record the approach required to create a basic single player mission. It is by no means a comprehensive tutorial. But having watched it the viewer should be in a much better position to create custom missions.

Posted by supanova at 15:49 No comments:

The AIM-9 Sidewinder is an iconic missile. In this tutorial we pair it with the F16's ACM FCR mode, stepping through the various submodes and explaining their uses in a demonstration engagement with enemy aircraft in which its value quickly becomes evident.

Posted by supanova at 15:45 No comments:

World of Warships Appetite for Destruction #1

The first in an occassional series of World of Warships random battles.

Posted by supanova at 15:42 No comments: